Payloads of well over a tonne

Up until the introduction of the Fanuc M-2000iA/2300, the Fanuc M-2000iA/1200 robot was the strongest 6 axis robot on the market. But this powerful heavy-duty robot still has what it takes to satisfy all but the most very demanding of high-payload material handling applications. 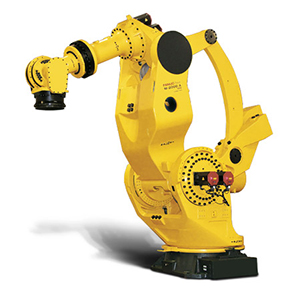 Power to the max

Capable of mastering enormous payloads of up to 1200 (1350) kg, this robot stands out as one of the most powerful Fanuc robots.

With one Fanuc M-2000iA robot doing the work of 2 to 4 conventional robots, robot systems have just become much simpler, more reliable and easier to reprogram.

With a 1250 mm offset this powerful robot is ideal for handling and palletising ultra heavy structures and products.

With its huge payload and reach the Fanuc M-2000iA robot can do the work of conventional cranes, lifters and shuttles to increase production and eliminate the need for dangerous manual work.