The perfect match between a small size and a heavy payload 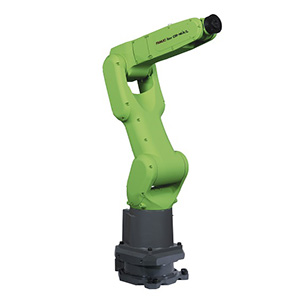 Thanks to the Fanuc CR-14iA/L's optional hand guidance for teaching and handling it's really easy to teach the collaborative robot. It can be programmed by simply leading the robot through motion points of the future task. New iHMI guides provide step by step guidance for setting up and creating programs, along with other wizards/tutorials.

Agility at its best

The kinematics and flexibility of my slim profile mean that I can work close to my base, thus making best use of the available workspace. With my small footprint of 296.5 x 235 mm, I am an ideal candidate for space-saving installations.

As all Fanuc robots, the Fanuc CR-14iA/L can be equipped with any of Fanuc's intelligence features - made by Fanuc, developed specifically for Fanuc robots. Intelligence-ready features include Fanuc iRVision, 3D vision with Fanuc 3D Area Sensor, as well as Fanuc Force Sensors.

Due to the Fanuc CR-14iA/L's collaborative nature, it can work in direct cooperation or alongside humans in a shared work environment - without the need for safety fences or sensors. The Fanuc CR-14iA/L immediately stops when being exposed to a person or fixed object thanks to proven safe contact stop sensor technology.