Since the invention of the delta robot back in the early 1980s, it has evolved into an innovative and high-speed solution for a wide range of assembly, picking and material handling applications. 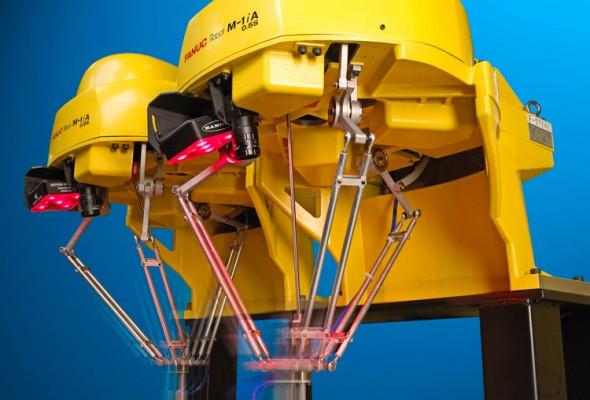 A delta is a parallel-link robot, meaning its major mechanical axes act on the robot faceplate in parallel rather then in series. With a conventional or serial link robot, each axis moves each successive axis’ actuators all the way to the tooling interface. For a six-axis robot this means that axis one moves the tooling and work-piece and all the actuators for axes two through six, and axis two moves all the actuators for three through six, and so on.

With a three-axis delta robot, each axis is connected directly to the faceplate. The movement of these three axes (either one or a combination of all three) will move the faceplate in Cartesian coordinates. A fourth axis can be directly connected to the faceplate to generate rotation. Because each axis only needs to accelerate the faceplate, much higher acceleration rates occur, which may result in reduced cycle times compared to a serial robot. Top speeds of 10 meters per second are typical for most delta robots. In addition to high speed performance, another significant advantage of a parallel-link robot is improved repeatability at the tool tip.

Delta robots were initially deployed with great success in three and four-axis variations in the picking and packaging industry. A picking application is one where the output is a specific pattern of product and the input is a random or semi-random stream of that same product. Often, machine vision and conveyor tracking are employed directly with several delta robots in one large picking system handling an overall system throughput of several hundred parts per minute. Packaging involves placing several products into a package such as a shipping box or other container. Often the output of a picking system will flow directly to a packaging application. Many different industries make use of picking systems, including food, medical, electronics, cosmetics, etc.

Fanuc Robotics offers two variations of delta robots. The Fanuc M-1iA is a lightweight and compact four or six-axis, parallel-link robot designed for small part handling, high-speed picking, packing, and assembly applications. Its very small foot print and envelope allow it to be installed next to a manual operation with minimal engineering. The Fanuc M-3iA robot is a larger version of the Fanuc M-1iA. Available in a four- or six-axis model, the Fanuc M-3iA offers the same unique parallel-link structure, and accommodates payloads up to 6 kilograms. In addition, it has the largest work envelope of any robot in its class (1,350 millimeters x 500 millimeters).

The Fanuc M-3iA is now working in a variety of industries from an automotive engine facility to the high speed sorting of bakery products. Compared with most delta robots that are limited to either three or four-axes, the Fanuc M-1iA and the fanuc M-3iA are available in both a four and six axis versions. The six-axis variant allows for the completion of tasks which involve manipulating parts and/or tooling at compound angles. By combining a three-axis wrist with the speed and precision of a delta robot, and the integrated intelligence offered by all Fanuc robots, Fanuc Robotics is rapidly making possible the automation of many tasks which are now either manual or done by expensive hard automation.

Intelligence is more than just a buzz word in the robotics industry, it is an ever-increasing reality. Both force control and machine vision are becoming more and more prevalent as part of industrial robot systems, especially with assembly operations. In an ideal world, parts line up and fit perfectly; however, in the real world work pieces often require a wiggle or visual adjustment. Machine vision and force control are increasingly able to handle these challenges, and when combined with a delta style robot, the cycle time of each operation falls dramatically, which reduces the number of robots required and improves the return on investment timeline!

With picking applications, machine vision is employed in conjunction with conveyor tracking to accurately track a randomly located product on a moving conveyor belt at speeds as high 1,400 millimeters per second. The machine vision camera will continually snap and locate product at some point upstream of the delta robots. When a product is identified by the camera, its location is combined with the current position of the conveyor belt. As the product enters a robot work area the robot is able to accurately move to the product and either pick it or work on it while matching the current conveyor speed. Delta robots are the preferred style for this type of application since the amount of time the robot deals with each product needs to be as short as possible in order to maintain the usually very high system throughput. With assembly applications, the same concept is applied where machine vision is used in conjunction with a delta robot to locate and pick a specific part on a flexible feeding conveyor and assemble it to a mating work piece.

While the payload of delta robots is considerably less than that of serial robots their use of intelligence is still as strong. Remote force sensing is now used to accomplish difficult assembly applications quickly using six axis delta robots. By remote mounting the force sensor, small six-axis delta robots are able to make use of this game changing technology. Vision cameras can be mounted directly to a delta robot’s tooling or fixed-mounted in the robot’s work envelope.

Machine vision is increasingly used for inspection either before a part is put into an assembly or after the assembly process is completed, and Delta robots can make this process quicker and more cost effective. How? By mounting a camera to a delta robot which could then move and check several different inspection points very quickly and then remove bad parts and/or assemblies, keeping them out of the supply chain.

Like all robots, delta robot deployments will continue to see strong growth as more and more operations across all industries embrace automation as a way to cut costs and stay competitive. When light payloads and very fast cycle times are required, whether it is assembly, picking, dispensing, or any number of other applications, delta robots will continue to meet the challenge.