Robots – more affordable than you think

With the state of the current global economy, the manufacturing industry has faced some of the toughest challenges in recent memory. With global machinery sales down significantly, declining exports, rising unemployment, coupled with increasing globalisation and cheap foreign imports, the Australian manufacturer can be excused for thinking the whole world is against him. 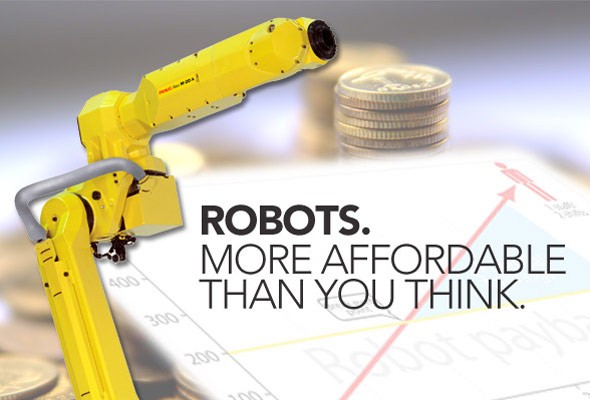 However, as was true before the financial crises set in, and even more so now, if Australian manufacturers are to succeed and prosper, they must do everything they can to contain costs, the highest of which is often labour.

With massive staff cutbacks affecting all industries around the country, workplaces in which robotic automation is a viable alternative to human labour certainly need to begin looking for ways to minimise the effect of the downturn while also looking to improve efficiency and increase productivity.

For a long time, many manufacturers viewed automated systems and robotics as expensive and unfeasible. Yet today’s robots are more versatile and affordable than ever. When considering implementing an automated robotic solution, what companies often did not realise however, is that when they calculated the payback on an automation solution it could in fact be very cost effective.

For the purpose of this article let us assume that it costs around $50,000 per year to employ an operator, and we will consider a turnkey robotic cell complete with in feed and out feed conveyors, safety fencing and programming at a cost of $200,000.

Looking at the figures we can see just how affordable the robotic solution really is:

Additional benefits include the prospect of running unmanned with a “lights out operation” to add an extra third shift, reducing inactive time (robots do not take breaks and holidays), the removal of OH&S issues and increasing process quality through the consistent programmable nature of the robot.

Automated robotic installations can be used on a large variety of applications, and in this example we have shown that the robotic solution is the right investment decision.