“The Mazak Integrex machines are renowned for their multitasking abilities, and as we are a workplace that follows Lean manufacturing and 5S principals, Mazak was a clear choice for us,” says Mark Palaszewski, CNC Machining Supervisor at APCO. 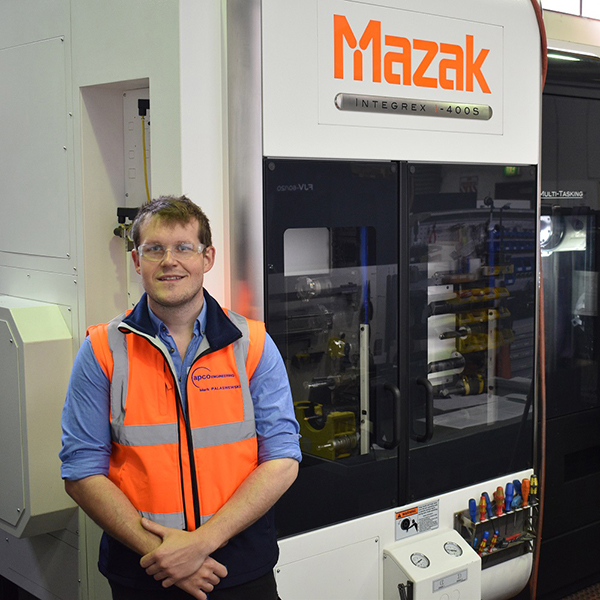 Established in Hobart over 30 years ago, APCO Engineering is a casting and machining business specialising in servicing the marine and industrial sectors.

APCO has its own in-house foundry where castings are produced in ferrous and non-ferrous metals including specialised materials such as high-strength, heat, wear and corrosion-resistant cast irons, alloy steels and stainless steels, and supplied “as cast” or machined in its machine shop. The company prides itself on working with the latest technology, recently enhancing its machining capability with a Mazak Integrex i-400S and a Mazak FJV 60/120.

“The Mazak Integrex machines are renowned for their multitasking abilities, and as we are a workplace that follows Lean manufacturing and 5S principals, Mazak was a clear choice for us,” says Mark Palaszewski, CNC Machining Supervisor at APCO. “The Mazak Integrex i-400S allows excellent ergonomics for the operator and reduces the cost tied up in our work in progress by allowing us to machine parts to completion in one machine. It also has a larger tool magazine (72 tools) which was another key feature for us, further reducing set-up times.”

APCO investigated numerous options from a range of machine tool builders before chosing the Mazak FJV 60/120 due to its excellent machine ergonomics and its large capacity. Despite being a relatively large machine, it was easier and faster to use than the old machine that it replaced, which had less than a quarter of the capacity. Its Smooth G controller makes programming quick and the machine ergonomics make set-up and operation simple. The full machine enclosure and internal augers allow APCO to rough aluminium without interruptions regarding chip evacuation or swarf handling.

“We chose Mazak as we already have a number of Mazak machines here and there is familiarity between them with regard to programming,” Palaszewski adds. “We also chose Mazak for their known quality and long service life, as we still have our first Mazak CNC lathes running here.”

The two new Mazaks have enabled APCO to enhance production processes. Palaszewski explains: “In our Mazak Integrex i-400S the bulk of our work is endcaps and spherical bearings for hydraulic cylinders we design and manufacture. These actuators are used for the steering of aluminium catamarans and to control hydrofoils. The parts start as aluminium bronze castings . We perform all the turning and milling operations in our Integrex.

“We also make a few parts for underground mining machines. Our foundry produces the steel castings. Some of these parts we can machine each of the three operations on the one jig. Even though there is no lathe work on this part, a well-designed jig combined with the B and C axis of the Integrex means we can machine them far quicker than a typical three-axis machine centre can.”

Most of the work performed on the Mazak FJV 60/120 is large aluminium plate processing. Some parts will start off as 200mm thick sections of plate, from which APCO mills foundations to be welded into catamarans later. It is also used for aluminium hydrofoil machining, for ride control system on ships. Here the FJV 60/120 shines both for its machining envelope it has, and because of the right-angle head that can be used in it.

“The right-angle head combined with our CAM software allows us to 3D machine in ‘impossible’ locations on the workpiece,” says Palaszewski. “Despite the size of the Mazak FJV 60/120, due to the speed, accuracy and ergonomics of it, we can even machine quite small workpieces such as hydraulic SAE port blocks, 3D-machined moulds used to cast electronics in encapsulating resin, or even engraving with a Ø0.5mm ball-nose endmill.”

Ian Swan, John Hart’s Victorian Branch Manager, remarks: “The main benefit of the Mazak Integrex i-400S for APCO is the donein- one feature of this machine (five-axis machining). Having one machine to perform all the machining in one set-up avoids potential inherent set-up inaccuracies. It also avoids the handling issues of having to move workpieces around the workshop and reduces work in progress.”

When APCO received the Mazak FJV 60/120, the team knew it would be faster than their previous machines, but they had no idea how much faster. The machine was a total success, offering improvements on every front: ease of use, programming, capacity, rigidity, accuracy, and most importantly - speed. The spindle RPM alone was a big improvement, but combined with the power and duty cycle rating it is far more productive than just the RPM increase alone. APCO has had to double its swarf recycling bins to keep up with the chips the machine makes.

Palaszewski summarises his experience with John Hart: “The machines are only part of the solution; there’s also the aftersales support and maintenance . Our experience with John Hart is definitely world-class, they respond to our needs promptly and above expectation. The applications guys are knowledgeable and understand our requirements, and spare parts and service have never been an issue, despite us being in another state.” 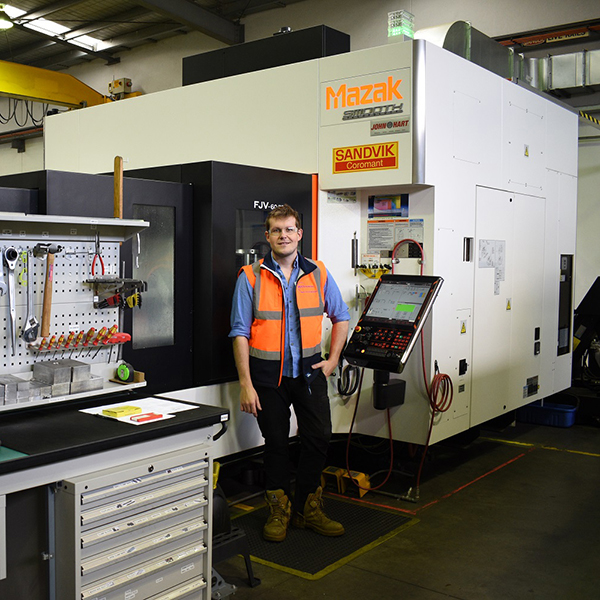