They’ve been manufacturing parts in Melbourne for over 23 years. Their business has remained strong while competitors have fallen and they have acquired many companies, expanding their own business and are in the process of modernising their Tullamarine workshop. Meet Amiga Engineering. 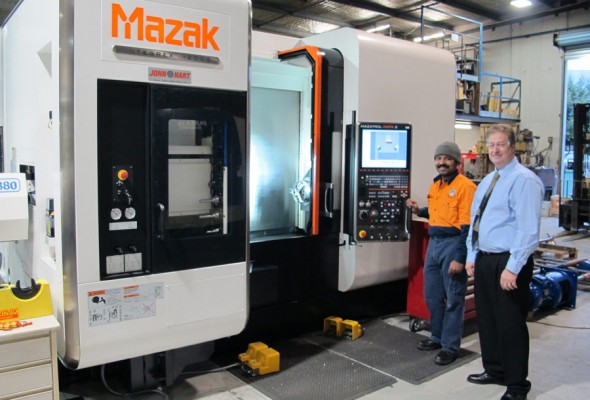 Michael Bourchier created Amiga Engineering through the restructure of a former company, bringing with him former employees and customers alike. Since then they have merged with two other companies, buying out Bradley Technologies, a medical component manufacturing company and Genet and Wood, one of the last Australian gearbox companies.

The business is now run out of their Tullamarine workshop which houses 17 people on the floor and between 30 and 40 machine tools. Michael tells me the CNC’s now outnumber the manual machines after the company recently completed a massive clean out of obsolete machinery.

“The next few months we will be throwing out all the old equipment, bringing the company forward in terms of technology, which is why we bought the Mazak Integrex i-200S.”

The Mazak Integrex i-200S is the newest addition to their workshop. Purchased from John Hart for its multi-tasking functionality and 5-axis simultaneous machining capabilities, its main focus will be creating small fittings, medical componentry and gear box components.

“A lot of the work we do is turning orientated, but with aspects of milling and complex features. We look at the Mazak Integrex i-200S as the best starter (into new technology) for us. We will see where that takes us.”

As manufacturing in Australia becomes more competitive, especially with the influx of Chinese companies fighting for a piece of the market, Australian companies must become more versatile and efficient, which is where the Mazak Integrex i-200S becomes so effective; especially for companies like Amiga. Setup time is reduced and in most cases jobs can be run on the one machine. In Amiga’s case, they’ve managed to replace four machines.

Amiga have spent several years looking at the Mazak Integrex series as an option to replace their older cnc lathes and the prospect of gear hobbing machines. Since the introduction of the travelling column style Y-axis, the INTEGREX i-200S is able to cut larger gears than previous models, which makes it ideal for Amiga’s requirements.

Trust was a major factor in moving forward with John Hart and the Mazak Integrex i-200S, “I think the main reason, was I felt we would have better support. There are a number of these machines in the manufacturing industry which are working well. I wanted to take on something that I trusted to be the point of entry into this new technology.”

“In addition to that, we had access to the machine fairly quickly and John Hart were very helpful in getting us setup.”

Find out more about the Mazak Integrex i-200S.