Gears are a massive part of everyday life and can be found in everything from large mining machines down to children’s toys. Gear Design & Service (GD&S) is a Melbourne based company that specialise in everything gear related. As Clayton Sanderson (Co-Owner) puts it, “if it doesn’t have teeth we don’t take it on.” 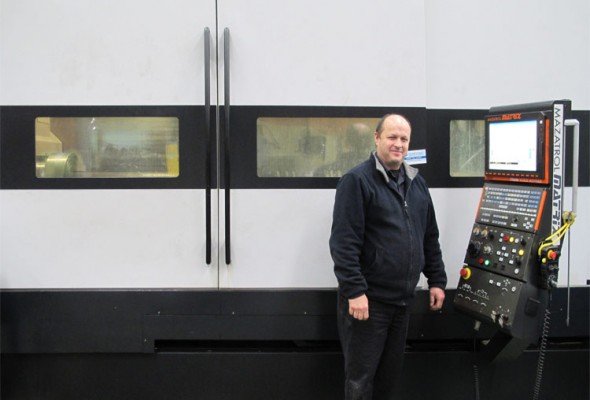 GD&S as the name suggests, design and service gears for companies all around Australia, and while the majority of work comes from companies within or related to the mining industry, they do work for a variety of others as well, including the food industry, marine and even gears for vintage car restorations.

Their workshop is mass of machines and at one point Clayton suggests they have as many as 100 machines present in their workshop. While smaller manual machines take up much of their workspace, leaving only small walkways in-between, it’s easy to spot the bigger machines towering over everything else.

In the corner of the first bay is a massive 1.2 meter Klingelnberg C100U Spiral Bevel Generator which was purchased from John Hart Machine tools, which Clayton proudly claims is the largest in the southern hemisphere, or at the very least the only one in Australia. In the next bay, the recently purchased Mazak Integrex e-500 II H dominates the room. It’s an extremely impressive machine. Clayton says, “People come into the factory, and see the INTEGREX and say, I want to put a job on that!”

The Mazak Integrex e-500 II H was purchased after initially approaching John Hart about buying a Mazak Quickturn 450, but realising they also required an additional CNC machine. “We needed a second machining centre, so the Mazak Integrex e-500 II H was a great option as it allows us to do both machine milling and turning, and it takes up less space (than two machines).”

Since the introduction of the Mazak Integrex e-500 II H, GD&S have been able to shift their operations up to larger sized gearing. “We went for the 3m Integrex as we have another lathe that is bigger in turning capacity, but it doesn’t have the length of the Mazak Integrex e-500 II H. It also gives us a bit more flexibility; it allows us to do jobs nobody else can, which is the main focus of our business.”

“The real positive is you’ve got one setup, and you can do multiple tasks with the one setup. Instead of 2 or 3 machines, we put a part in the Mazak Integrex e-500 II H and it comes out finished. You get the program right and can leave it to do its thing. And that is a big, advantage.”

“Recently we cut a face clutch for a big exploration drill in North Queensland. They brought the part in and they wanted it overnight. Because we’ve got the flexibility of the Mazak Integrex e-500 II H we can put it in the machine and get it out the next day.”

The majority of GD&S’s CNC machines are Mazak. There are two operators splitting their time between four CNC machines. As a result Mazak's Mazatrol conversational programming system plays a large role in their more complex machining.

“The Mazatrol programming system makes it so much easier to operate; we do all our programming on the controller which saves us heaps of time, otherwise we’d need to spend another 20-30K on a CAM program. The operators can have a job setup, programmed and running in less than 30mins, that’s the real key to the Mazak brand I think.”

Mazatrol has long been praised for enabling fast and efficient conversational programming, which is why John Hart only needed to provide a couple of days training in order to bring the operators up to speed with the new machines.

Since completing the training, GD&S have been able to take on more complex jobs, with the operators comfortably transitioning to the multi-tasking style of machining. This multi-tasking style brings with it all the benefits of turning and milling, with the added advantage of operating everything within the one machine and one setup, saving time and money; producing parts far more efficiently and with higher accuracy than the other machines at Gear Design & Service previously allowed.

Find out more about the Mazak Integrex e-500 II H.