Austbore is a large jobbing shop located in Mackay, Northern Queensland. They service the mining and resources industry and have done so successfully for over 20 years. The company originally started with only one machine have slowly expanded, now employing 35 full-time tradesman and host a variety of machines including manual and CNC borers, CNC milling machines, CNC lathes and two new Mazak Integrex CNC multi-tasking machines, which were purchased from John Hart within the last twelve months. 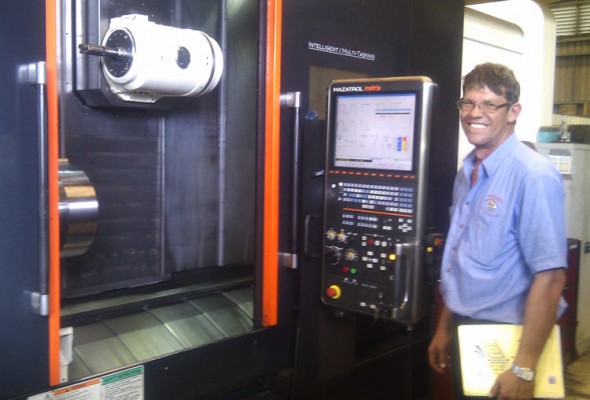 John Hart were chosen largely, as Darryl Lindsay (Operations Manager at Austbore) puts it, “because of their enthusiasm in regards to supplying the Mazak Integrex. The process went very smoothly, and communication between Austbore and John Hart was very easy.”

The two new Integrex (Integrex 200S MkIV & Integrex e-420 x 3000) were initially bought as a way of combating long cycle times. Because all work at Austbore is jobbing with some one-off parts, cycle time is incredibly important and since the introduction of these machines, Austbore have been able to expand the variety of work they take on.

“These machines have given us greater capabilities and we’ve taken on work we would never have dreamed of taking on before.” said Darryl, “Especially regarding the Integrex e-420, there are more options than you could ever dream for.”

“The only problem is the machines are so versatile, after 12 months we are nowhere near where we need to be, because there is so much that can be done on them. That’s not a criticism, that’s a complement.”

“Mazaks also seem to have more Y-axis travel, and the positioning of the head to 240 degrees provides more capability as well. Comparable machines just don’t look as appealing.” Says Darryl
Since purchasing the e-420, Austbore have been quite creative with its use, creating a fixture that bolts onto the chuck, which allows the operators to perform milling operations on all four sides of a part without changing setups.

“The advantage of this is we can set a work piece, put the component into the machine, set the zeros, write the program, and pull the finished component out at the end of the day without actually having to reset it. These are pieces which require milling on four sides, including bores, interpolation of the bores, milling of threads and seal areas and wear areas. “

“Before the e-420, we would have to use two to three setups, increasing the margin for error with each change over. We’ve managed to reduce the timeline on the pieces by two thirds. This is an enormous reduction.”

This reduction is possible thanks to Mazaks “done-in-one” technology which comes standard with all Mazak Multi-tasking machines. The operators have also succeeded in exploiting the e-420’s capabilities, to complete a task normally reserved for a machining centre.

John Hart initially provided a week’s worth of training and a couple of days here and there where necessary. Considering that, operators have found the machines easy to transition to and between.

Darryl explains, “The controllers on the 200S and e-420 make operating the machines quite separate experiences. Considering each operator has had to learn two different controllers simultaneously, they haven’t had too much of an issue. Any minor problems we solved with a call to John Hart.”

“We currently have two operators working between the 200S and the e-420 and while we’d ideally like 2 more to split the workload, experienced operators are hard to come by in this part of Queensland.”

Rather than trying to attract experienced operators to their shop in Mackay, Darryl says Austbore are making internal training a priority, using their Mazak VTC as a stepping stone in order to prepare operators for the Integrex’s.

If Austbore can maintain this balance between expanding their knowledge of the Integrex’s and internally training their operators, their capabilities will continue to increase, and Austbore will be able to run extra shifts, increasing workload. The Mazak Integrexs, and especially the e-420 provide unlimited possibilities, and increasingly lay the pathway to manufacturing of the future.