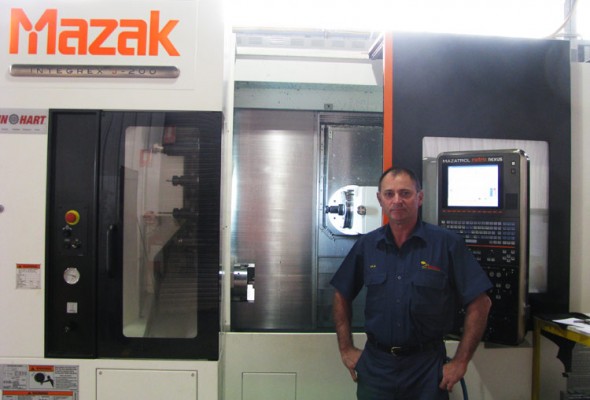 Firefly International, located in Newcastle, NSW is one of those companies who have benefitted from their ability to supply a range of smaller components, replacement parts and special items to order in a timely manner. They have been able to do this because of their commitment to the latest machining technology which enables them to produce more accurate and varied parts with greater flexibility and with a quicker turnaround.

Firefly quickly understood that to do this they had to upgrade their old machines with the newer multi-tasking equipment which was faster, more versatile and they could embrace the “Done in One“ or single set up philosophy which enabled them to produce with one machine what previously took two or three older machines.

Firefly have been a Mazak user since their first CNC machine, a Mazak T1 using a universal controller. They were excited by the new Mazak Integrex j-200 series which offered them a chance to machine more complex parts and not only attract new customers, but to expand the range of work they could do with their existing customers. Since their first machine purchase back in 2003, Firefly has more quadrupled their capacity.

The arrival of their new Mazak Integrex j-200 has marked the point of considerable interest from new customers eager to test their capabilities. Dale Bonetti the head machinist at Firefly visited one of their current customers recently, he said “I went through their workshop and picked off about a half a dozen jobs we can complete without the Integrex, but with the Integrex that’s increased to 30 items.”
Their workshop currently contains exclusively Mazak machines, ranging from a Quick Turn 150 to the newer Integrex j-200. They use the QT150 and their QTN200M to produce integral drill steels and the Integrex is used for jobbing. There are also several manual machines, which are used to train up apprentices before being moved to the CNC machines.

Dale Bonetti has pioneered the machining side of Firefly, introducing their first CNC machine 8 years ago, a T1 with a universal controller they have since quadrupled their capacity. He explains his reason for choosing Mazak as their favoured brand: “...they just seem to be the easiest to train with. When using the conversational controls they’re almost effortless to operate.”

Ease of use when training is important as the quicker operators become comfortable with the machine the less downtime is required. The Mazak conversational controller is renowned for its speed of programming and intuitive operation. Coupled with John Hart’s training and service programs, it becomes very easy to change over to a new machine, using the new technology. With the introduction of the Integrex j-200, it took approximately three days to get the workshop fully operational again.