An interview with the Ken Johnson, the Managing Director of Jayben Australia Pty Ltd 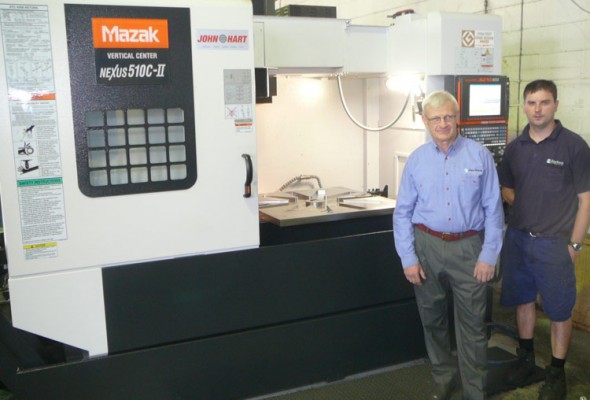 John Hart: What type of products does your company produce?

Jayben: Our company is involved in three industries: We’ve got a manufacturing license with GKN Walterscheid to manufacture parts for a range of agricultural driveline products in Australia for the Australian and New Zealand market.

We are a major supplier to Caterpillar, or Cat Underground in Tasmania of driveshaft’s and drive shaft components and some other components.

We also have a business based in Tasmania which makes a range of small road sweepers and they’re fabricated and sold out of Tasmania but a lot of the machined components are made here in Adelaide.

JH: Why did you decide to purchase a new machine? And how were you able to internally justify this investment?

J: Really this latest machine was purely based on workload, particularly for Caterpillar. Our factory here in Adelaide is set up into three distinctive areas.

JH: So those operations are completely separate of each other?

J: There is a little bit of overlap between the different cells depending on the workload at the time, but we try and run them as separate entities.

JH: You purchased a Mazak VCN 510C; why did you purchase this particular machine over others in the Mazak range? And what about this machine makes it a good fit for what you produce?

J: There was a couple of issues I guess; we really only needed a basic three-axis machining centre because of the type of work we do, but we did specifically want something with through spindle coolant. Along the way, we found we could fit it with a probe system. Quite often, because of the geometric tolerances of the components we make, each part will need to be clocked up before the machining starts. The use of the probe system saves a huge amount of time in changing from one part to the other. We obviously got quotes from other suppliers, but in the end the thing that really sold us on the Mazak was the delivery schedule.

We needed something really quickly, we’ve got two other Mazak machines in the place, we’ve always been enthusiastic about Mazak’s because of the quality of the machines for a start and secondly the backup (service, technical back up, spare parts) which has always been really good.

John Hart came up with a pretty good deal for a quality machine so in the end it was an easy decision.

JH: Is this the first time you have dealt with John Hart Machine tools?

J: We bought our first Mazak machine 21 years ago, while there was a bit of a drought in between, we bought a lathe 18 months ago and now we’ve bought this machining centre.

JH: What part of the operation was the lathe bought for?

J: The lathe was bought specifically for manufacturing these agricultural driveline yolks. Unfortunately because of the workload we’ve had from Caterpillar we’ve never made an agricultural yolk in it, and all it’s doing is assisting in making Caterpillar parts.

But we bought this machine which has live tooling on it, because there are a number of products which have been included in our license with GKN Walterscheid that really lend themselves to a lathe with live tooling. We haven’t actually started to make those products yet, but we need to as soon as we can get into it.

JH: Could you talk about the machine you were using before the VCN and how it differs?

JH: With the difference between the old and new machine, has the process of creating a part differed? Have you had to create new programs?

J: No it’s a pretty quick change over, and because the old machine has a Fanuc controller on it, we wanted to rewrite all the programs in Mazatrol. But it’s not a big deal, the Mazatrol system is pretty easy to come to grips with and so whilst we chose to rewrite the programs, we didn’t really have to because the controller could also run in the ISO language

JH: Have your operators found the new machine easy to adjust to?

J: Yes they have, because the training provided by John Hart is terrific. The team from the Adelaide Branch trained us. They’re a good bunch of guys with a wealth of information, they’re also great instructors.

We’ve been working on a special project, which is something a bit out of the ordinary for us, and John Hart has been down here two or three days this week helping us.

It’s a big press tool pressing the hub of a radiator fan out of a mining machine, which is a thing we are doing with a company we have a close relationship with. So whilst we would only do this sort of thing once in a blue moon, this machine has enabled us to do it. With the assistance of John Hart, it’s something we can do, otherwise we probably wouldn’t attempt it. How long has this project taken from start to finish? You weren’t drawing the designs up were you?

We had to create the model for it; this is only an aftermarket part. They gave us some samples of the parts and we had to get a company to do the initial drawings. One of our guys, with the assistance of John Hart, created the model and now the program is up and running.

JH: Is there anything you would like to add regarding the machine or the installation process?

J: No not really, like I said you can’t argue with the quality of the Mazak and the backup is as good as you would get from anybody and that says it all I think.