After five years of painstaking research followed by the last three years evolving his fledgling business, Olly Dmitriev has taken Vert Rotors and his patented range of compressors to market, launching the latest product at the recent IMTS Show in Chicago.

The Edinburgh company that was founded by the award-winning entrepreneur has created a series of ultra compact, low vibration and extremely powerful patented compressors. The new VERT.04.W nano rotary compressor produces clean compressed air to 115psi from a miniature 100mm by 40mm system running on 150W of power, with low noise and low vibration. This new conical compressor is widely acknowledged as the smallest screw compressor in the world. The closest alternative is piston compressors producing vibrations and disturbing noise. The conical compressor technology has been recognised as a potential 'step-change' by Centre for Defence Enterprise (CDE), UK Ministry of Defence. Whilst developing such complicated technology is one challenge, producing it is another. Its here that Open Mind Technologies stepped in with its hyperMILL CAM solution. 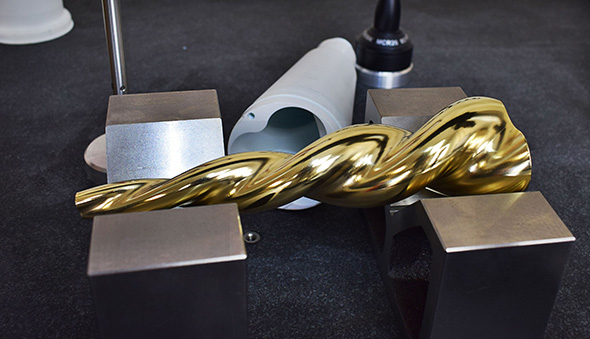 The male and female conical rotors are the core innovation inside the conical compressor, which was developed by founders of Vert Rotors. As Vert Rotors Managing Director, Mr Olly Dmitriev comments: "Whilst many components such as tubes, pipes, filters and fittings are easily accessible, we were using a 3D printer to produce the innovative and complex conical rotors that complete the compressor assembly. The 3D printer was incapable of achieving tolerances of less than 100 microns and the 3D printer material had integrity and mechanical issues that gave the prototypes a short running time and a high rate of part failure."

Unable to locate a subcontractor willing to take on the complicated manufacturing, the nine-employee company realised it had to machine its own parts. Vert Rotors invested in a Hurco VMX30 milling centre with a Kitagawa rotary table to deliver a 3+2 axis configuration.

As the company's first ever machine tool acquisitions, the choice of CAM software was undecided. Vert approached all the leading CAM vendors and when the complexity of the parts was revealed, all but two vendors dropped out. Following further investigation, Vert became aware that Open Mind's hyperMILL was the only CAM system with comprehensive integrated collision avoidance that would provide complete confidence in the machining process. Additionally, choosing hyperMILL for Solidworks, the Gold certification from Solidworks confirms the perfect integration that allows Vert Rotors to integrate its Solidworks CAD system with the new seat of hyperMILL CAM Software. 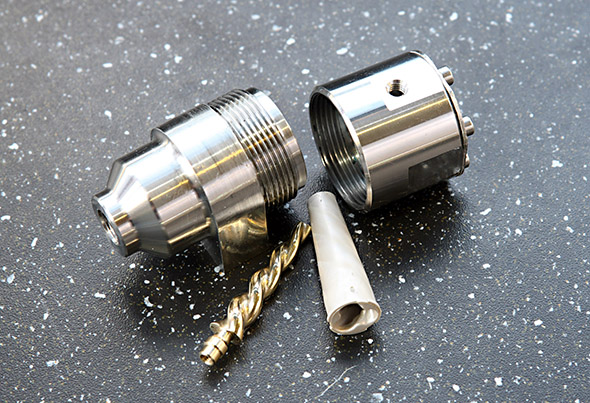 This complicated and critical component needs hyperMILL to continuously calculate and check for collisions 'in-process'. The depth of the hole and the required tool length were also factors making this process more difficult. The form of the internal feature requires hyperMILL to continuously and simultaneously prevent workpiece collisions with the cutting edge, the tool shank and also the toolholder of the lollipop geometry cutting tools. Using hyperMILL's tube machining strategy, the calculations are processed at remarkable speed; a key reason why Vert opted for hyperMILL."

Developed for the delivery of compressed liquid or air, the core components of the VERT.04.W nano rotary compressor are machined from composite polymers, stainless steel, or brass. This depends on whether the compressor is specified for airor fluid applications, whilst the industry sector is just as important. With uses in satellite, aerospace, medical, automotive and food and drink industries to name a few, the compressed air industry is expected to reach US$13.5billion by 2017. With the support of Open Mind, Vert Rotors is aiming to make headway into this multi-billion dollar industry.

As Mr Dmitriev concludes: "Whilst using the 3D printer for development compressors, we searched for over three years for a subcontractor that would take on the conical compressor project. When we decided to manufacture the parts ourselves, even CAM suppliers were unable to help with many admitting their packages weren't up to the job. We found the situation somewhat frustrating, but Open Mind made the seemingly impossible, possible."