Fanuc has two new robot controllers, the R-30iB Plus and the R-30iB Mate Plus. 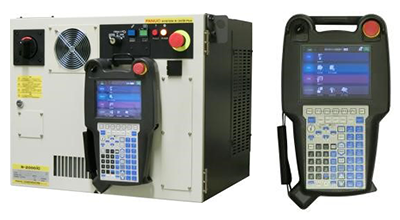 The new robot controllers feature the new iPendant with enhanced screen resolution and processing capability. With more flexible appearance, the user interface has had a major facelift. The new user interface, iHMI, can display guides for setup and programming, as well as tutorials from the main home page, enabling easier use of robots. By using the programming guide, even first-time robot users can create a program for a simple handling task and execute it in just 30 minutes. Easier usage also facilitates system setup and maintenance to improve efficiency.

At the same time, Fanuc robot users from the past are able to use the previous version of user interface, which they already feel comfortable with.

The vision function has a new camera interface which increases four times the speed for transmitting images from the camera, and a simplified cable configuration. With improvements in the user interface, setup of the vision system can be handled much more efficiently.

The new robot controllers will contribute to the easier use of robots and automation in the manufacturing industry. Find out more about the range of Fanuc robots.