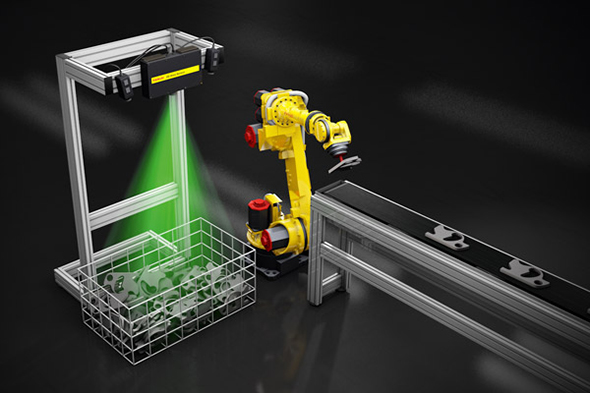 Fanuc has achieved this reliability and functionality with the Integrated Vision iRVision suite installed on its R-30iA robot controller.

Particular manufacturing processes require robots to locate and transfer large parts that cannot be accurately located by a single camera view. In order to fit a large part into the view of a single camera the stand-off between the part and camera can be several metres, reducing the resolution (pixels per millimetre) of the image and so the overall accuracy of the system.

The integrated vision system is easily setup through the robot web-server that is accessed through one of the two freely available Ethernet ports on the R-30iA main board, once the vision process has been taught and calibrated the PC is removed and the captured images can be viewed on the large LCD screen of the teach pendant.

Simple menu based commands are used in the robot program to activate the required vision process and apply the resulting combined position offset from both cameras. Robot programmers do not need to run complicated external algorithms in order to get the desired result, and as the vision process is being executed on the robot controller, there are no restrictive communication problems and delays that are commonly experienced with third party vision systems.

Fanuc’s iR Vision system is an inexpensive option and adds immense flexibility. The overall cost of your robotic system can be greatly reduced by removing the expensive part fixtures and location devices previously seen as indispensible to a successful robot installation.