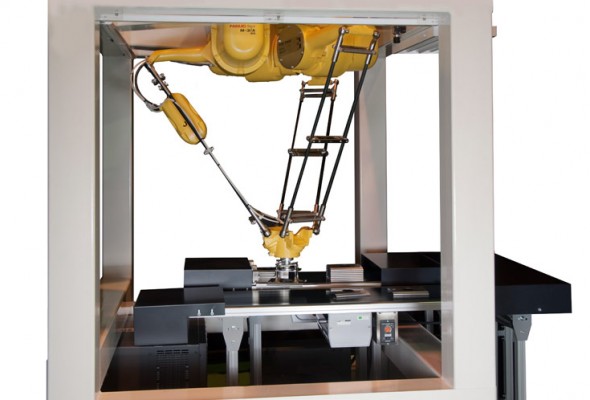 Available in 4 or 6 axes configurations, the design provides a compact handling solution for machine or system integration. Aimed at assembly and packing operations the parallel link structure allows the compact Fanuc M-3iA to be located safely in confined areas. Its cylindrical work envelope, 0.5 Mtr deep by 1.350 Mtr diameter, is concentric to the robot mounting base making it straight-forward to position and guard relative to peripheral equipment.

Available in a 4 axes configuration as well as 6 axes, all joint motors are positioned well away from the wrist avoiding being exposed to high acceleration and, dependant on application, aggressive materials. All joints and mated components are completely enclosed and sealed to IP67 rating – the wrist is suitable for working in a dust or oil mist environment.

Realising the importance of this high speed configuration for picking and packaging applications, Fanuc Robotics has produced a Food and Pharmaceutical version. The Fanuc Robotics M-3iA food robot has a white epoxy finish for harsh material protection which also allows the arm to be disinfected with acid and alkaline fluids – food grade grease completes the specification.

The 4 axes model M-3iA/6S has a hollow wrist for routing hoses through the centre of the gripper reducing interference, hose breakages and downtime while permitting very fast work piece rotations.

Applications requiring more complex positioning are suitable for the six axes M-3iA/6A with its ability to pick up components, assemble them at an angle and rotate them – effectively replicating a human operator but at far greater speed, with high repeatability over an indefinite sustained period.

The Fanuc Robotics M-3iA is controlled by the intelligent R-30iA controller with integrated functions including iRVision, Robot Link and Collision protection. All that the robot requires to benefit from iRVision is a camera and a cable to connect it to the controller – a housing is provided in the robot body to position a camera above the wrist of the M-3iA.