State Minister for Industry and Employment Wade Noonan and Member for Eltham Vicki Ward visited Lovitt Technologies Australia (LTA)’s factory in Montmorency, Victoria, on 10 August to announce a $387,000 funding boost for the manufacturer.

The funding is part of the Victorian State Government’s Future Industries Manufacturing Program, which is supporting Victorian-based manufacturers grow and create jobs. 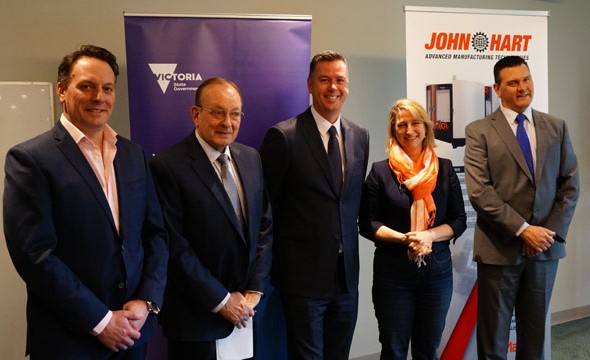 The funding will go towards the purchase of a Mazak Vortex i-800V/8 next-generation CNC machining centre, which will enable them to manufacture the floor structure, bulk heads and the engine mounts of the F-35 aircraft. The Vortex i-800V/8 is a vertical machining centre with a 80cm square pallet, and a tilting spindle that allows for five-axis simultaneous machining of complex contours on large parts, such as jet engine casings, airframe components and gearboxes, made from titanium, aluminium and steel. The machine comes with a two-pallet changer that provides unattended operations and off-cycle part set-up, allowing operators to load, unload and inspect parts on one pallet while the machine works on the other undisturbed.

Established in 1954 as George Lovitt Manufacturing to manufacture cutting tools for the Australian automotive industry, LTA has evolved continuously over the subsequent six decades. Quick to anticipate the decline of Australian car-making, it branched into fields as diverse as communications, defence and food & beverages. However, the company has really specialised – and made its name – in the field of aerospace over the last 20 years. Today LTA is a provider of high-technology precision engineering and support services to the aerospace, defence and general commercial sectors.

Aerospace components account for around 95% of LTA’s business. The company is a key supplier to Boeing, working on the 787 ‘Dreamliner’ as well as the 747 and 737 airliners. In the defence space, the company supplies parts for the Lockheed Martin F-35 Lightning II joint strike fighter, the Boeing F/A-18 Hornet and F15 Eagle fighter jets, the V-22 Osprey V/STOL military transport aircraft, P-8 Poseidon and the CH-47 Chinook helicopter. It also supplies some components for smaller commercial aircraft such as the Gulfstream private jet.