As a family owned business established since 1973, Long & Marshall Ltd has seen its fair share of downturns and recessions over the last 35 years. However, the Havant based subcontract manufacturer to the aerospace, defence, medical and F1 industries believes its investment in technology and highly skilled staff will not only maintain but generate business through the current economic climate. 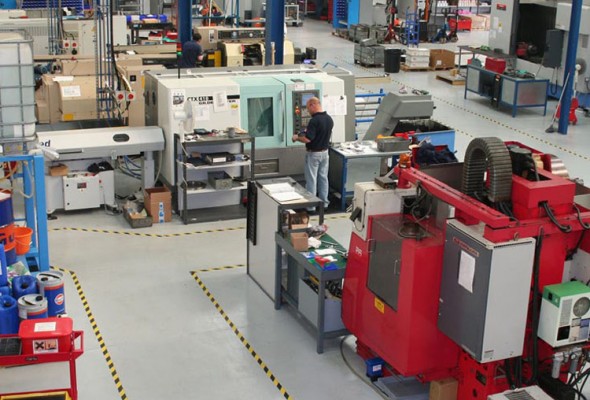 As Long & Marshall Managing Director, Mr Vince Long comments: “Little over four years ago we moved from a 9,000 to a 24,000sq/ft facility and we have invested considerably in 5-axis machining technology to maintain our competitive edge in industry sectors that demand ever increasingly difficult and complex parts. We have acquired 13 CNC machine tools with more recent acquisitions including a DMG EVO LINEAR 5-axis machining centre and a CMZ 35Y turning centre with a Mikron HPM800U 5-axis machining centre set for delivery in June.” With an increasing number of 5-axis machine tools that started with a tilt & turn Mazak CNC Machine in 1999, Long & Marshall realised it had a bottleneck in the programming of some of its complex components.

The 42 employee company needed to improve its CAD/CAM software to resolve the situation, so it set about reviewing the market. In 2007, Mr Long attended a DMG Open House that was co-hosted by DMG technology partner OPEN MIND. At the event, an application specialist from an F1 engine manufacturer was delivering a presentation on how OPEN MINDs’ hyperMILL® CAD/CAM software had improved production and processing times for the leading F1 team. Following the glowing endorsement and witnessing the exceptional speed of programming at a demonstration at Long & Marshall, Mr Long acquired two seats of OPEN MIND’s hyperMILL® in October 2007.

Part of the reason that forced the change from its current vendor was a version upgrade that became very different visually and hence time consuming. However, since the change to OPEN MIND the company has been ecstatic with its acquisition. As Mr Long continues: “We witnessed immediate benefits with hyperMILL®. We produce a number of different complex drill heads for the oil and gas industry and each type has a programming time of between 10 to 20 hours with manual geometry creation. However, the hyperMILL® system has feature recognition and it allows us to program 50 holes at any geometry in minutes as opposed to hours. We have taken the programming time for drill heads from 10-20 hours to less than 6-8 hours with the feature recognition tool on the hyperMILL® system.”

From drawing to complete part the drill heads previously took over 30 hours, with hyperMILL® the overall production time has been cut by around 50%. The machining strategy of hyperMILL® has further enhanced productivity by generating an on-machine cycle improvement of an additional 15%. With such an immediate impact, Mr Long was assured that he had chosen the correct CAD/CAM package for his business. The feature recognition tool has been implemented on additional parts such as aerospace brackets where compound angles, holes, and faces can also be easily machined.

Another major benefit of the OPEN MIND system to Long & Marshall is the ability to conduct programming off-line. The hyperMILL® system enables the company to verify its tool paths and watch the part being cut on-screen and in such detail it highlights any issues prior to the program being loaded to the machine. With less time spent programming on the shop floor, the machine tools spend more time conducting actual machining than on-stop being programmed. Instead of having a man and machine on-stop, parts can be programmed in the office whilst the machining centre is running. This also helps to ensure that components are right first time as opposed to having the inspection department verify a manually programmed part.

Further justifying Mr Long’s decision to purchase hyperMILL®; at one point the company had such a programming backlog, it sub contracted out the programming of some aerospace brackets to a specialist programming house. The exercise cost the company in excess of £7,500 and the parts were later machined internally to the specified demands of the customer. Following the acquisition of the OPEN MIND package, Mr Long started to re-program the parts with hyperMILL®. Not only was one of the brackets programmed faster than at the external programming house but the machining strategies of hyperMILL® improved the surface finish, quality and cycle time of the brackets considerably, much to the delight of Long & Marshall.

Reflecting upon the OPEN MIND acquisition, Mr Long states: “Our accuracy, productivity and surface finishes have all improved since purchasing the OPEN MIND system. What’s more we have remarkable service and support that gives us confidence to tackle pretty much anything the customer throws at us. And in such testing times, our machine shop is ready for anything that comes through the door.”