Azimut works with hyperMILL like a fish in water

That’s what good NC paths should be like: smooth, round and effective to machine. hyperMILL from OPEN MIND creates such NC paths, for milling dream yachts, for example. And that’s why the famous Italian shipyard, Azimut-Benetti, uses the software from Germany. The result is better boats and greater cost effectiveness. 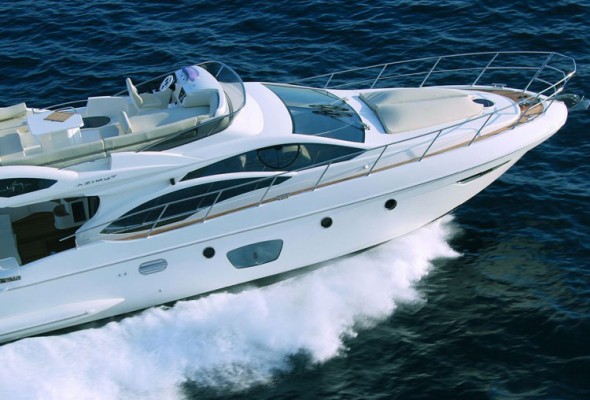 Ocean-going yachts are highly emotional products, similar to sports cars. Anyone ready to pay their price gets not just outstanding technology but also aesthetics, design and functionality. Another important criterion is the length of the boat. Having a couple of metres extra makes you the king of the seas. Although 50 metre-long boats were still considered impressive at the end of the 90s, trade journals are reporting that they may soon be 100 metres longer. The Italian group, Azimut-Benetti, has been active in this world for years.

Azimut-Benetti has the largest production network for super yachts

The American magazine, “Showboats International”, which issues an annual rating for the financially strongest yacht manufacturers, has awarded its number one spot to Azimut-Benetti for the last nine years. The company is Europe’s largest yacht manufacturer and the worldwide number three, with a turnover of € 738m in 2006. Average growth in the last ten years amounted to an impressive 25 per cent. The sales forecast for 2007 is € 785m. Azimut-Benetti is very well represented on the international market: 85 per cent of products are exported, and moreover to all the important world markets.
Production – traditional and industrial

Azimut Yachts builds yachts with lengths of between 39 and 116 feet and has an Open range with models between 43 and 103 feet. Production is centred on two sites in Italy, Avigliana (close to Turin) and Viareggio. The boats are partially assembled in the traditional way at a shipyard work station. For the high-volume models, however, production on industrial assembly lines is now also used. Today, the most important boat parts are made of fibre glass materials. Construction with a 3D CAD system (Unigraphics), ever increasing quality requirements and cost pressures have been leading towards the employment of CNC machines for many years. To supply these machines with optimal NC programs, the company sought out the best possible CAM system. After extensive market analysis, they chose hyperMILL from German manufacturer, OPEN MIND.

The hyperMILL CAM system encompasses a broad spectrum of machining strategies, starting with 2D feature machining, right through to 5-axis simultaneous milling. For other applications, this spectrum can be widened with powerful special applications for milling multiblades, singleblades and for mould channels. Furthermore, the system now offers mill-turning. The vast array of productive automations and tools enables programming times to be significantly cut by up to a third, even with complex parts. One reason for this is the greatly enhanced feature technology. It helps standardise the programming of recurring and similar geometries. This is made possible by more flexible feature definitions.

Another innovation is that machining strategies and tools can be combined into macros. After definition, the macros are automatically assigned to the detected features. The macro database is structured very clearly and lets you reference macros with images. This makes it much easier to sort through the database and plan jobs. Taken together, the software’s macros and feature technology represent a new level of programming automation. The software has also completely redeveloped collision control and avoidance. In 5-axis simultaneous machining, tool positions can be automatically calculated without defining guide curves. This is possible because collision checking now extends to the entire part. As well as enhanced feature and macro technology and fully automatic collision avoidance, hyperMILL® also has an array of other improved functions that make working with the system quicker and more comfortable. Thus the milling paths are really smooth and effective – just like fish in water.

The shipbuilders chose hyperMILL because of:

The Italians were also impressed by the exceptional interplay of software and postprocessors, so that the best possible output of the CNC machines is triggered. Amongst other things, hyperMILL Expert was installed, the most comprehensive version of the CAM software, with 2D and 3D functions, as well as feature technology. In addition to this, Azimut also uses multi-axis machining, the 5-axis reworking cycle, 5-axis profile finishing, 5-axis contour-machining, 5-axis ISO top milling and Z-level finishing, to name just the most important. Overall, the introduction of the CAM system is being judged very positively: not only has the quality of the boats improved, but also the financial side in the form of shorter production times and quicker development. This is because this process chain also allows development models to be completed more quickly.