As the key player, Australian-owned tooling developers, Sutton Tools, requires no introduction. Since their inception in 1917 they have proven to be great pioneers, adopting and developing new technologies to improve the efficiency of cutting tools and their manufacture, including the latest coating technologies. As part of this ongoing development, Sutton Tools has invested heavily in the use of robotics. 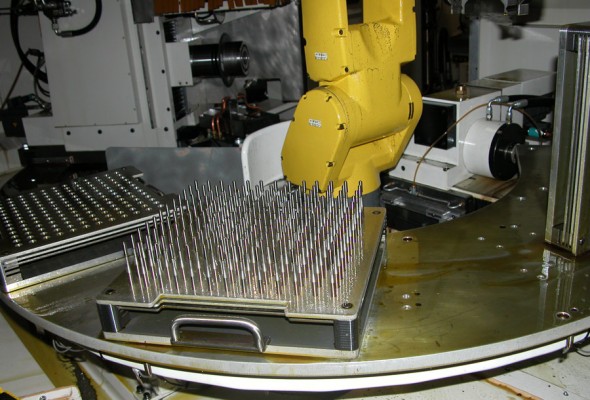 From an automation prospective, cutting tools are principally long cylindrical components, regardless of whether they end up as drills, taps or milling cutters. As such they can be handled in much the same way as any process proven to benefit from being automated – for example, you wouldn’t imagine tins of beans to be labelled by hand nowadays.

This thinking, along with growing competition from outside Australia prompted Sutton Tools to re-evaluate all its key processes and determine which would benefit most from being further automated. As the production bottleneck was manual loading and unloading, this was the first to be addressed. Batch sizes range from 1 to 5,000, with the average being in the order of 500 – 1,000, so there was much to be gained by freeing up operators to focus on programming rather than loading and unloading.

The company has four manufacturing locations: three in Victoria and one in New Zealand. At Thomastown, Victoria, the focus is on HSS tooling such as high performance drills, taps and milling cutters. There is also a small carbide division but most of the carbide tooling is produced at the other plants. The highest volume plants are in Maryborough, Victoria and Kaiapoi, New Zealand, where between them up to 120,000 standard drill bits are produced per day. It’s these plants that employ the vast majority of special-purpose automated machinery, most of which has been either developed in-house or commissioned as a special.

“What we needed, and set out to achieve over the past six years, was to develop an automated system capable of transporting components from one machine to another using a palletised system” said Phillip Xuereb, Chief Engineering Executive. “As we saw it, the best way to do that was to make use of a robot system, so we embarked on installing a FANUC robot, supplied by John Hart Automation & Robotics. This was adapted to work with an inhouse developed palletising system (basically an aluminium plate with a large number of holes corresponding to the diameter of the tool shank), but sat alongside the machine rather than being fully integrated.”

“Our first applications were the manually loaded machines. We then replaced simple automation, already existing on the machines, with a retrofitted robot. This gave us the ability to move components from one machine to the other via the pallets. It’s an ongoing process where we are looking to replace all manually intensive tasks with automation. When we design a machine, we decide whether or not to use a palletising system and robot as an integral part of the machine.”

“Our aim was to do three things:

“The first exercise we undertook comprised a thread grinding machine and FANUC robot. We found that the productivity of that machine based on the same hours was 40% greater than our previous manual setup. The reasons for this were that it ran more continuously and there was no waste of time between the loading processes. Also, the operator didn’t have to drop another task to attend to the machine,” says Xuereb. Based on that improvement, it wasn’t too difficult to convince the management to continue investment along these lines and retrofit robots to other machines by virtue of productivity. Regarding training, I asked whether operators required special courses to bring them up to speed.

The answer was yes, but Phil was quick to point out that Sutton Tools employed highly trained operators. “We needed to have specialists in robotics positioning and programming and so forth so we sent a number of our people to external training courses.” Therefore, Sutton Tools had to put a fair bit of investment up front but the return was good.

Sutton Tools needs to compete with low cost imported products, yet also needed to have the flexibility; therefore they went about using as many of the same type of robots as possible throughout the plant. By adopting this approach, they could move operators and jobs around with relative ease.

Today, Sutton Tools has achieved its objective. Productivity has certainly increased, and one robot has now become 25. The company has an ongoing program to automate processes. Any new machinery built for them includes an integrated FANUC robot situated within the working envelope. For example, if a new machine is commissioned, it will include a FANUC robot as standard. A number of ‘special purpose’ CNC machines have also been built in-house with an integrated robot. These are Sutton Tools own designs for specialist tooling, as such they are not for sale.

“Basically, we have standardised on the 6-axis FANUC LRMate systems because we have found them to be very reliable and offer us the flexibility we need”, says Xuereb. The robot control programs are integral with the machine’s CNC controller and programmed by the machine operator as part of the job. They principally work to pick and place each tool using a now standardised Sutton designed palletising system and specially developed gripper systems which are also made in-house. The robot systematically picks a tool blank from the pallet and places it in the grinding machine’s chuck ready for the grinding cycle. It then retrieves the finished ground tool and places it in a second pallet ready for further operations. The robot is typically programmed to pick components for inspection as set intervals and place them in a separate tray.”

The pay back is that we have a happier workforce – we haven’t gone about applying robots to reduce workforce, what we have done is reduce the manual handling. The staff appreciates this as they don’t have to do monotonous jobs like manual loading anymore, leaving them to focus on programming and getting the next job underway. Our people are very good at understanding that we needed to make efficiency changes in order to stay ahead of competition. We practice lean manufacture principles; therefore this was an extension of this philosophy. Part of our brief was to have a quick set up that was operator friendly. So having those in place we’ve had a high acceptance level. Else where, I have seen where processes have been put in a manufacturing operation and not accepted by the workforce so they’ve never been used to their potential.”

Regarding the future, Sutton Tools is in discussion with John Hart Automation, to look at the possibility of using a vision system to select components from a basket and load up the initial pallets with the right tooling blanks. At present this is done manually and is very labour-intensive.

“Robots are making huge leaps in terms of their technology. They are becoming easier to use and more reliable and are now being augmented with vision systems for selecting grippers, etc. Gone are the days where people are thinking, ‘I don’t want to use a robot, they crash all the time. Today’s robots won’t crash.... mind you it is critical to consider the safety aspects”, says Xuereb.

In summary, further automation will result in efficiency gains, production gains and a happier workforce.