Weighing in at almost 10 tonne, the Fanuc M-2000iA is one of the largest and strongest handling robots on the market. 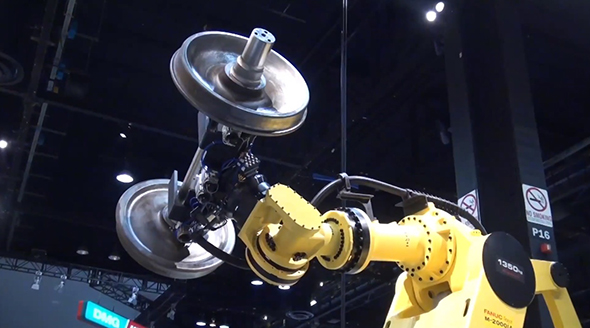 Two payload variants of the M-2000iA are available, a 900Kg and 1200Kg version respectively. The 900kg version has a maximum reach of 4.7m with a vertical stroke of 6.7m which can easily replace dedicated lifting gear and hoists.

The M-2000iA/1200 boasts the most powerful robot wrist available, with a software option the maximum payload increases to 1350Kg. With the capacity to transport loads of 1000Kg up to 1055mm from the roll face of the wrist, the Fanuc M-2000iA/1200 is a truly functional one tonne robot.

The M-2000iA robot series expands robotic automation into areas that previously were only deemed possible with heavy dedicated equipment or complex multiple coordinated robot systems. For seriously heavy duty robotic automation applications, the Fanuc M-2000iA is unrivalled on every level.